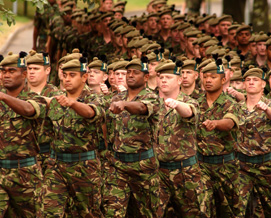 Armed Forces Day is Saturday 26 June 2010. The day is an annual opportunity for the nation to show support for the men and women who make up the Armed Forces community: from currently serving troops to Service families, and from veterans to cadets.

Across the country people are getting involved: communities are holding local events and businesses are showing their support.

In Wolverhampton on that day there will be two key events. The first is a Parade of serving armed forces personnel, veterans including a contingent from the Dutch Princess Irene Brigade. The Parade will step off from Wulfruna Street at 11:15 and return to St.Peter’s Square via Lichfield Street culminating a raising of the Armed Forces Flag in the presence of the Mayor . The second event takes place the afternoon is a free public exhibition between 2:00pm and 4:00pm at the Civic Halls. This event is called ‘Celebrating Armed Forces in Wolverhampton’ and will include exhibitions and activities relating to different aspects of Armed Forces life and history. Examples include 3 linked displays outlining the contribution of BME communities during the war, Air Force Cadets, Gazebo Theatre and displays from the British Legion. The exhibition will also feature work by children from Wolverhampton Schools which will be on display at the Civic Centre from Monday 21 June.